Ideally, multiview rendering in Paraview will enable a client to request multiple render windows from the server manager. Each window could then be placed in its own QVTKWidget and be placed like any other widget in the Paraview client.

In order to support multiple render contexts, the render server must somehow support the requests for rendering different contexts. Opening multiple render windows on the server is problematic since overlapping windows can cause undesired behavior by graphics hardware. Sharing a render window can be achieved by either multiplexing the renderers or laying the renderers out. The latter option was chosen because this will work well in tile display mode and the client should easily be able to provide the layout inevitably created for its own GUI.

Implementing multiview will require changes in IceT, the server manager's render modules, and other parts of VTK and ParaView.

vtkIceTRenderManager has been changed to support multiple vtkIceTRenderers, all of which will be composited correctly so long as they do not overlap.

When a renderer's viewport did not cover the full render window, the tile layout given to IceT had to be modified such that it covered the part of the global display related to the viewport. This is done simply by intersecting the renderer's viewport (in global coordinates) with each tile's viewport, culling out empty intersections. In places where the viewport divided a tile, this often lead to tiles of varying size. IceT handles this just fine so long as all rendering contexts can render full tile images. vtkIceTRenderer assures this by calling glViewport with the entire rendering context and disabling the scissor test. Having a tile split into renderers also requires the pieces to be cached and reconstructed, as the composite of each renderer obliterates the image from the previous one. An end render callback on all vtkIceTRenderers grabs the composited image and copies it to the appropriate place in the reduced image buffer.

For technical reasons, changes in the VTK/IceT rendering classes caused changes in other classes. This section documents some of the changes that occurred.

To get around this issue, you can now specify a subset of renderers that vtkParallelRenderManager will synchronize. This is what is used for the vtkDesktopDeliveryClient/Server between the client and server.

This mechanism is supported in vtkIceTRenderManager, but there is a catch. The composited image in memory only has images generated from vtkIceTRenderers, not from any of the non-composited renderers. As far as ParaView is concerned, this means that the annotation is stripped off of the image.

This is actually a happy accident since we want the annotation stripped off so that it can be drawn on the client side. However, if we need the annotation available on server-generated images (for example, for an animation), then we need some extra logic to ensure that we read the images from the OpenGL frame buffer.

Although there may be many bugs hidden in the new render manager code, here are the known issues or potential problems.

To get around this, a flag called Draw has been added to vtkRenderer. When Draw is off, the Render method does nothing. Thus, the render module can render the data for a single render window on the client side by turning off the rendering on renderers associated with all other client-side render windows.

Because there are multiple client objects that connect to the same server object, the client objects must be identified. vtkPVDesktopDeliveryClient has an Id ivar. The id should be set to a number identifying it. The numbers used do not matter so long as no id is used twice.

vtkPVDesktopDeliveryServer has a method AddRenderer(int id, vtkRenderer *ren) that is used to associate renderers on the server side to the render window on the client side.

. This is flipped in the y coordinate from what OpenGL and VTK use for pixel coordinates. So, for a window in the upper left corner, its window position should be

. For a window in the lower left corner, its window position should be

is the height of the parent GUI window and

is the height of the render window.

Next, create render modules (one per view):

However, this is not enough. The server objects have to be notified of the size and position changes. This can't be done automatically because VTK and the server manager do not know anything about the position of the views inside the GUI. In the small example I wrote, I first added an event filter to the QVTKWidget:

In the callback, I resized the views as follows:

I put together this example by copying, pasting and modifying from a test program that I created (by modified the old Hello World). If something does not work as expected, please contact me. I might have missed something. You can find more information in the header files of vtkSMMultiViewRenderModuleProxy and vtkSMIceTDesktopRenderModuleProxy. 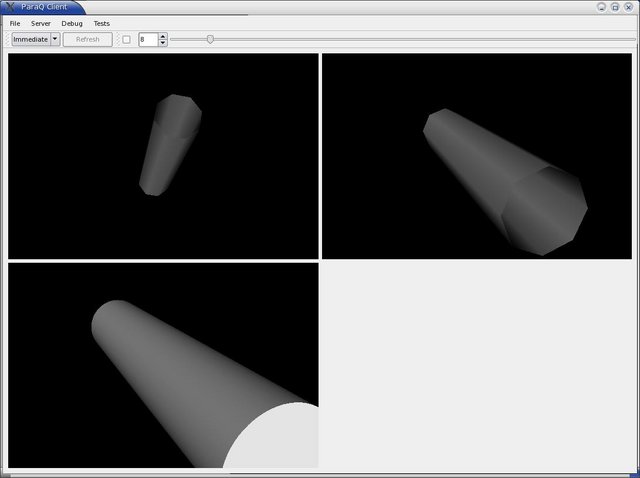