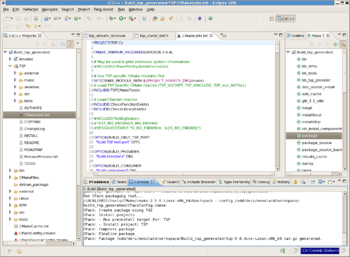 With this generator it is possible to create a set of .project/.cproject files that can be imported in Eclipse as an "Existing Eclipse project".

Since August 1st the Eclipse generator is included in CMake cvs.

If you would like to monitor the changes to the EclipseCDT4 support, you can view the following links which contain the cvs history log for changes to the two main files:

Using the Eclipse CDT4 generator is not different as using another CMake generator. In this example I assume the source tree of my project is /home/eric/certi_src

There is a limitation of the CMake CDT4 Eclipse generator when your source tree is handled by a versioning system (like CVS, Subversion or other) you may read the referred discussion in the link below.

A may acceptable solution is to have 2 projects:

You will find a screen cast describing how to it here: File:CMakeEclipseCDT4andCVS-2.ogg

Eclipse assume project files (i.e. .project and .cproject) must be at the root of the project tree and a project may be handled by a versioning system (CVS, SVN, ...) iff the root project tree is.

This assumption clashes with the fact that CMake generated files should stay in the build tree whereas source files (which are usually those handled by a versioning system) reside in the source tree.

There has been a fair amount of discussion regarding this problem of the Eclipse CDT4 Generator: