Difference between revisions of "ParaView/Equation Rendering"

From KitwarePublic
< ParaView
Jump to navigationJump to search 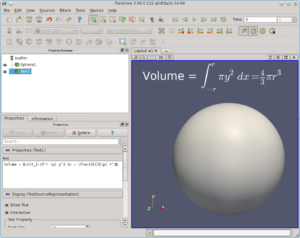 New in the 3.98 series, support for equation rendering is being introduced to various text objects in ParaView. Equations are specified using MathText markup, which is a subset of LaTeX. See the complete specification for the MathText language at [1].

ParaView will check text for a pair of "$" symbols surrounding a MathText expression. If such a pattern is found, the entire text field will be rendered as an equation. If it is not found, the text is rendered normally. To render a string containing two or more "$" symbols that is not intended to be an equation, use "\$" to tell the parser to treat the symbols literally.

As a result of using Python to render the equations, MathText strings may take noticeably longer to render than other text.

To compile ParaView with support for MathText, simply turn on PARAVIEW_ENABLE_PYTHON during configuration with cmake. While matplotlib is not required at compile time, the Python libraries must be available. ParaView will attempt to locate the matplotlib module at runtime, and will disable MathText rendering if it is not found.

The MathText rendering is performed by the matplotlib python module using the Python C API. ParaView uses the interface provided by VTK. The following classes in VTK provide this functionality: