The ParaView trunk and the upcoming 3.6.2 release include statistics filters. These filters provide a way to use vtkStatisticsAlgorithm subclasses from within ParaView.

Once ParaView is started, you should see a new submenu in the Filters menu bar named Statistics that contains 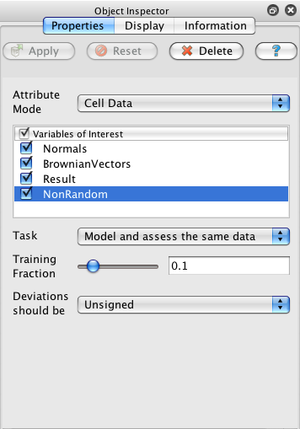 Warning: When computing statistics on point arrays and running pvserver with data distributed across more than a single process, the statistics will be skewed because points stored on both processes (due to cells that neighbor each other on different processes) will be counted once for each process they appear in.

One way to resolve this issue is to force a redistribution of the data, which is not simple. Another approach is to keep a reverse lookup table of data points so that those already visited can be marked as such and not factored in a second time; this might be inefficient.

This filter computes the mininmum, maximum, mean, M2, M3, and M4 aggregates, standard deviation, skewness, and kurtosis for each selected array. Various estimators are available for those 3 last statistics. 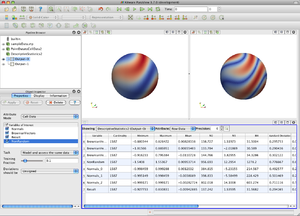 The assessment of data is performed by providing the 1-D Mahalanobis distance from a given reference value with respect to a given deviation; these 2 quantities can be, but dot have to be, a mean and standard deviation, for instance when the implicit assumption of a 1-dimensional Gaussian distribution is made. In this context The Signed Deviations option allows for the control of whether the reported number of deviations will always be positive or whether the sign encodes if the input point was above or below the mean.

This filter computes contingency tables between pairs of attributes. These contingency tables are empirical joint probability distributions; given a pair of attribute values, the observed frequency per observation is retured. Thus the result of analysis is a tabular bivariate probability distribution. This table serves as a Bayesian-style prior model when assessing a set of observations. Data is assessed by computing