We have added support for selecting an arbitrary list of points or cells as well as the capability of performing rubber band selection to VTK. Traditionally, VTK's only selection mechanism has been single cell or prop selection through picking. This new feature allows creation of selections consisting of an arbitrarily complex list of cell or points. Furthermore, it allows developers to support rubber band selection with the mouse. The result of the selection is a collection of cell or point ids corresponding to what is included in the rubber band area. This selection can then be applied to the original dataset to perform an extraction for further analysis.

vtkSelection - vtkSelection is a tree data structure storing selection results. Each node of the tree contains a vtkDataArray that can be used to store an id list, an id range, attribute values etc. Furthermore, it is possible to attach arbitrary meta-data with each node using a vtkInformation object. Commonly used meta-data items are CONTENT_TYPE (for example POINT_IDS, POINT_ID_RANGE, CELL_IDS etc.), SOURCE (a pointer to the dataset the selection came from) and PROP (a pointer to the 3D scene prop that selection came from)

vtkInteractorStyleRubberBandPick - This new interactor style draws a selection rectangle on the screen. It acts like the TrackballCamera interactor style, until the 'r' key is pressed. Once this happens, and until 'r' is pressed again, it creates a rubber band with each left button drag operation. On each drag release, it passes the screen start and end positions to a vtkPicker. The pre-existing vtkPicker classes get only the center of the selection area to maintain backward compatibility.

vtkRenderedAreaPicker - This is a child of the vtkAreaPicker class. It is more selective than its parent because in addition to the bounding box test above it also determines if the vtkProp has some visible contents within the selection area. vtkRenderedAreaPicker, like vtkPropPicker does uses OpenGL's GL_SELECT mode, aka hardware picking.

vtkFrustumExtractor - This vtkDataSetAlgorithm runs a software frustum intersection algorithm to determine which cells of its input vtkDataSet lie within a frustum defined by a rectangular region of the screen.

vtkFrustumExtractor contains two intersection algorithms, the first produces a conservative estimate of insidedness which can be incorrect with a thin selection area, the second algorithm is inclusive producing all cells that at least partially intersect the frustum. The ExactTest flag controls which is run. With ExactTest off, each point is simply evaluated against the six plane equations that define the frustum. Cells are inside if all of their points are inside. If the ExactTest flag is on, a fast cell frustum intersection algorithm is used instead (see Ned Greene, Graphics Gems IV, 1994, p 74-82). The algorithm can quickly accept or reject most cells by testing only the two points that are nearest to and farthest from each of the six plane equations. Only those few cells that are neither trivially accepted nor rejected are then run though a full polygon clipping algorithm.

The PassThrough flag controls whether the output of the algorithm is a shallow copy of the input vtkDataSet with two new "vtkInsidedness" field data arrays, or is an entirely new vtkUnstructuredGrid output that contains only the inside cells and points.

vtkVisibleCellSelector - Rather than operating in world space, this class operates in screen space using the rendering hardware. This class operates by putting vtkRenderer into new selection modes and telling it to render. When the render happens, each visible cell or data set is rendered with the color of each cell chosen to encode a unique identifier. After one or more selection render passes, the contents of the color buffer are read back, and each pixel is examined to identify which cell was frontmost in the scene behind it. Because color buffer resolution in VTK is limited to 24 bits, up to five passes may be required to obtain a complete result. Up to three passes are used to find the visible cells within the rendered datasets. One pass selects between actors, and another pass is used in parallel composite rendering to determine which processor is responsible for each visible cell.

vtkIdentColoredPainter - This class is a new vtkPainter that the vtkRender uses to render each cell in the color coded mode. This Painter temporarily turns off lighting and shading and sets the background to black to do its job. In selection mode, vtkRendered tries to swap in a vtkIdentColoredPainter for each prop. If the Prop is not rendering polygons or is not pickable, the prop is ignored (not drawn.)

The last two disadvantages are mitigated by the new passthrough feature of vtkDataSetSurfaceFilter and its kin. This preserves the input cell id of all of cells that produce surface polygons in the output. Using this feature, one can recover the front layer of any cell type that constitutes a dataset.

The new VTK level ctest located at VTK/Rendering/Testing/Cxx/TestAreaSelections.cxx demonstrates the use of both the vtkFrustumExtractor and the vtkVisibleCellSelector. In the test two datasets are drawn, one a vtkStructuredGrid, the other a vtkPolyData. When a rubber band selection happens, the portions of the two datasets that lie behind the screen rectangle are extracted and reproduced offset to the right (+X) of the original input datasets. 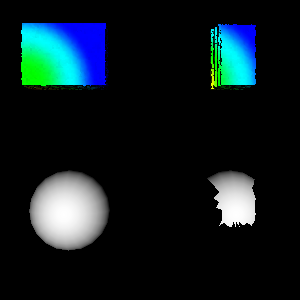 vtkPVSelectionInformation - This sub-class of vtkPVInformation is used to gather selections generated in parallel and deliver the result to the client.

vtkSelectionConverter - This class is used to convert from one selection type to another. For example, it can convert a selection made on the rendered geometry (output of vtkPVGeometryFilter), to a selection on the source of that geometry (input of vtkPVGeometryFilter). This is done by using the vtkOriginalCellIds array generated by the geometry filter. vtkOriginalCellIds is a pedigree id that stores the id of the cell each geometry cell originated from.

vtkSelectionSerializer - This class serializes/unserializes to/from XML vtkSelection. It is usally used to transfer vtkSelection over network (by vtkPVSelectionInformation for example) but it can also be used to store a selection in a file or to print it.

vtkExtractBlockFromSelection - Given a SOURCE_ID, extracts it's selected dataset from the output of vtkMultiBlockExtractSelection. It does this by checking the SOURCE_ID key in the Information of the output assigned by vtkMultiBlockExtractSelection. This can be used whenever a multi-block dataset is not convenient (for example when delivering the selection result to the client).

vtkPVVisibileCellSelector - Equivalent of vtkVolumeSelector for surface selection (G Buffer). This is a sub-class of vtkVisibleSelector that is capable of generating a vtkSelection containing cells ids (implemented in superclass) as client/server ids for the sources. This class is used by vtkSMRenderModuleProxy to implement vtkSMRenderModuleProxy::SelectVisibleCells

pqSelectionManager - pqSelectionManager is responsible of bringing all of the above classes to support selection on the client. The first time rubber band/pick selection is enabled, it initializes it's internal data structures and creates appropriate selection, extraction and delivery objects on the client and server. Once the selection is done, it either performs a surface selection (vtkPVVisibleCellSelector) or frustrum selection (vtkVolumeSelector). It then redistributes the resuting vtkSelection to the appropriate server/nodes and extracts from datasets using it. The result is passed through a display and rendered on the viewport. 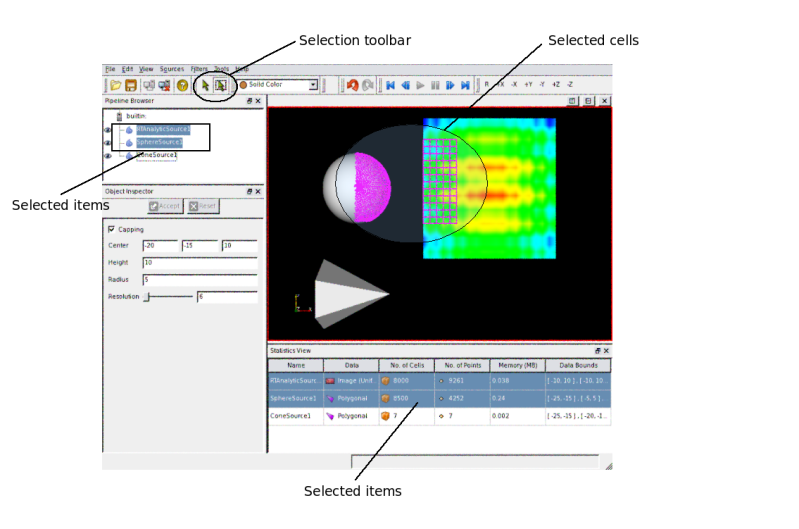