The author of this document is David Gobbi. He can be reached on the vtk-developers mailing list.

Within the imaging pipeline, interpolation is performed by vtkImageReslice, vtkImageResample, and vtkImageResize. These classes use interpolation to resample a whole image, but are not useful when a user wants to interpolate just a few points. Also, the code for vtkImageReslice is quite complex, so adding new interpolation modes to this class is beyond the abilities of most VTK programmers, and any programmer who did so would either have to submit their changes to Kitware, or maintain their own version of vtkImageReslice.

I had also planned to unify the interpolation code between the imaging pipeline and the geometry pipeline, so that these interpolators could be used with e.g. vtkProbeFilter, but decided to delay the unification until a future project. The main difference between the VTK image pipeline and the VTK geometry pipeline is that the former utilizes only scalars and structured coordinates for interpolation, while the latter utilizes all the arrays in the data set's PointData along with the point and connectivity information. It will be possible to provide a unified interface at some point in the future, by providing interpolation methods that operate on all of the PointData instead of just on the scalars.

Pipeline methods are meant to be called by VTK filters that utilize interpolator objects.

Most interpolation methods are separable, meaning that they can be computed separately in the x, y, and z directions. This allows some or all of the interpolation computations to be computed in O(N) time with respect to the kernel size N, instead of O(N^3) time which is required for non-separable kernels.

These are highly advanced methods, please see the header file for additional documentation. 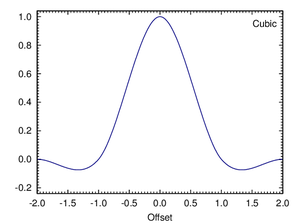 The vtkImageInterpolator class is the default interpolator. It provides nearest-neighbor, linear, and cubic interpolation. I decided not to split each interpolation method into its own class, since doing so would have caused a large amount of code duplication without adding any benefit. One class is easier to maintain than three, in this case. 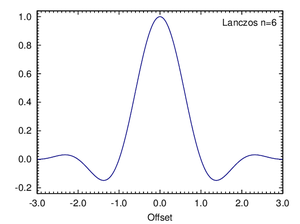 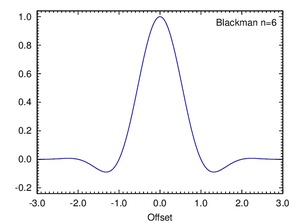 Blackman interpolation kernel, renormalized. This kernel has no edge enhancement and less ringing than Lanczos. 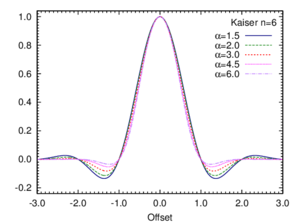 The vtkImageSincInterpolator provides an approximation to sinc interpolation by applying one of various available window functions in order to limit the size of the kernel. Compared to pure sinc interpolation, the use of a window function reduces ringing close to the cutoff frequency. The Lanczos, Cosine, Hann, and Hamming window functions provide good sharpness but at the cost of a small amount of ringing. The Blackman family of windows are closer to the ideal, they do not provide quite as much sharpness but have almost no ringing. The Kaiser window has a parameter to allow you to control the tradeoff between blurring and ringing. The rationale behind these windows is described in Nuttall AH, "Some Windows with Very Good Sidelobe Behavior," IEEE Transactions on Acoustics, Speech, and Signal Processing, Vol. ASSP-29(1), 1981. 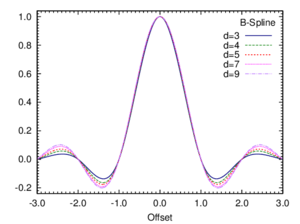 BSpline interpolation kernels of varying degree. Only the inner lobes are shown here.

The b-spline interpolator provides interpolation of images with b-splines of degree 2 through 9, with a default degree of 3, which provides a cubic b-spline.

The InterpolateIJK() method is inlined, it simply calls the function pointer and imposes no overhead:

The InterpolationInfo member is a pointer to a vtkInterpolationInfo helper struct, which contains information about the image data such as the scalar pointer and the increments. I chose to use function pointers instead of virtual methods because, with a function pointer, I can easily predict what code the compiler will produce for the function call. This was important to me because the Interpolate methods are usually called in very tight, performance-critical loops. It also allows the interpolation functions to be written in pure C code, though I am not yet certain what the value of that is.

As mentioned in the section above on separable interpolators, for an interpolation kernel of size N it is possible to resample an image in O(N) time instead of O(N^3). Currently, vtkImageReslice and vtkImageResample use a hybrid method where, when resizing an image, the interpolation coefficients are computed in O(N) but the convolution is performed in O(N^2) or O(N^3) time depending on the image dimensionality. I have written a vtkImageResize filter that performs the entire operation in O(N) time with minimal memory overhead through the use of a sliding window memory buffer. I can add this filter to VTK as soon as the image interpolators have been added. Added on Dec 29, 2011.

It would be possible to add methods to the interpolator classes so that they could return the gradient of the image at any (X,Y,Z) point. This would allow a future vtkVolumeMapper class to be written that used these interpolators, enabling VTK volume rendering to performed with higher-order interpolation kernels. It would also allow the interpolators to be used with vtkImplicitVolume, which requires gradient computation. There is no set timeline for this feature.

For the GPU to use an interpolator, the interpolation kernel would have to be converted into an array that could then be loaded onto the GPU as a texture. In the future a method could be added to the interpolator classes that would compute such an array. Rendering classes could then load this array into OpenGL and use it via a fragment shader. There is no timeline set for this, in fact it is unlikely that I will add such a feature myself.

Interpolators for the geometry pipeline

VTK's abstract data interface provides methods for interpolating any cell type, but there is no way for people to apply their own interpolation strategies. I began work on an abstract vtkDataInterpolator, but had to stop because it was taking too much time. I hope to continue the work eventually, but for now all of the information provided here is purely hypothetical and is subject to review. An abstract data interpolator would have a method like this:

The interpolator would have to internally store info about the points and cells (and it should probably store a locator as well). It would interpolate the input PointData at position (x,y,z) and then store the results in the output PointData at location outPointID.