The VTK widgets are undergoing a redesign. This is mainly to add functionality and clean up some inconsistencies with the existing implementation. We also have limited funding (see acknowledgements) to add new widgets in support of medical image processing (i.e., segmentation and registration).

There are four major goals of this work:

The following sections discuss eash of these goals and the proposed implementation. This page shows a variety of widget examples.

The current VTK widgets have hardwired event bindings; e.g., a "LeftButtonPressEvent" is hardwired to execute a particular action, and this action/event binding cannot be changed. This is a problem when users desire different bindings due to personal preference, use of different interaction devices, etc. A prototype design has been created that addresses this issue and is described in the following.

The basic idea is to create a separation between VTK events and widget events (see figure). An event translator is used to translate a VTK event into a widget event. In turn, the widget event is mapped into a method invocation. 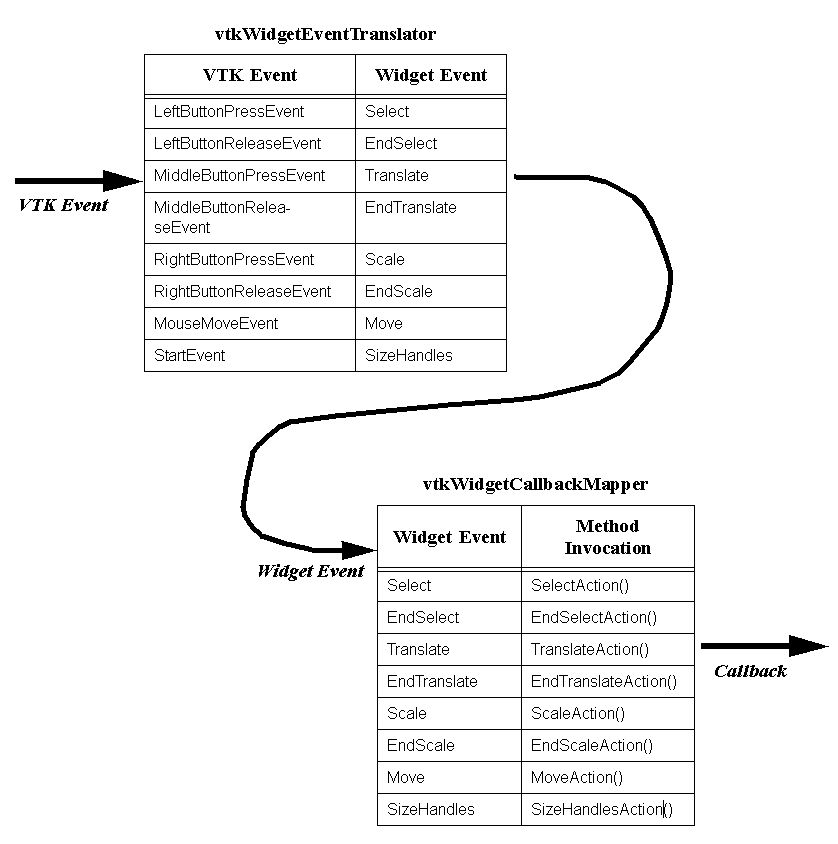 In practice this approach is overly simplified. The problem is that an event is really more than a VTK EventId, it includes various modifiers that go along with it (e.g., we'd like to bind Shift-LeftButtonPress to a particular callback). The current VTK implementation is based around only the EventId, and then leaves the callback to check for the appropriate modifiers. This poses difficulties if we want configurable event bindings, since the source code must be modified to process the modifiers separately. Hence the right way to do this is to create separate, simple callback methods that are independent of modifiers, and then insist that widget events include modifiers as part of their definition. In order to do this, the vtkWidgetEventTranslator map shown above is modified as follows. The key to the map remains the VTK event id, but the value is now a list of vtkEvents and associated widget events (see figure below). When a VTK event is received, the event id is mapped into the list, and then the list is traversed to find the matching event (the comparison takes into account the VTK event qualifiers). If found, the associated widget event is invoked. Note that the modifiers must include the notion of "ignore any modifiers" in case the user does not care whether or not the shift key is pressed at the same time the LeftButtonPress is.

Here are some code snippets showing the major features of the design. Refer to the vtkSliderWidget code. Thanks to Brad for helping out here.

This version of SetCallbackMethod() sets things up so that modifiers to the event are ignored. Alternatively, the following method allows specification of all of the modifiers:

Note that the vtkWidgeCallbackMapper must invoke methods on a particular class. The original design called for a templated class (templated on the widget class type). However this was discarded because either 1) the vtkWidgetCallbackMapper<T> would have to instantiated in each and every class (meaning duplicated code) or 2) very fancy template tricks would have to be used to centralize the instantiation and use of vtkWidgetCallbackMapper<T>. Instead of the fancy templated approach, a simpler approach based on static class methods is used.

Once the widget is constructed, the user can change the VTK event bindings as shown from TestSliderWidget.cxx:

The use of static class methods allows the code that sets up the cllbacks to be cetralized. In vtkSliderWidget.h we find the declaration of the callback methods:

These are referred to in the constructor of the vtkSliderWidget:

To set up the callbacks in the widget (i.e., add observers), the centralized code in vtkAbstractWidget::SetEnabled() is executed:

which is a very nice reduction in the code that was there previously. Removing the callbacks does not change:

Finally, the ProcessEvents() code also simplifies dramatically and is centralized in vtkAbstractWidget:

That's really all there is to it, with the exception that the widget callback methods should be renamed (i.e., rather than OnLeftButtonDown() the better name would be SelectAction(), etc.).

One of the major goals of the widget redesign was to separate widgets into two major parts:

From a high level, this has been implemented by creating two abstract superclasses:

There are two major reasons for this approach:

with the key method SetRepresentation().

The key to making this works is flushing out the basic expectations that the widget has for the representation, which of course manifests in the API that the widget and representation share. While the many widgets implemented under this design demonstrate that this approaches is feasible, defining the API has been one of the major concerns of this design since it does not appear that there is a universally common API that vtkAbstractWidget and vtkWidgetRepresentation (and subclasses) can define. While in general there are common methods, different types of widgets will have to define their own unique API. Instead, vtkWidgetRepresentation specifies an API that consists of a mandatory part, and a suggested part that subclasses are free to follow (or not). The mandatory API is:

The suggested methods are:

Most widgets also define an interaction state that is specified through an enum that lists all possible states. For example, the vtkHandleRepresentation (which is driven by vtkHandleWidget, similar to vtkPointWidget) lists the following states:

Additionally, the representations are subclasses of vtkProp, hence they can be added to the renderer just like any other actor, etc. This means that (at a minimum) they may need to implement the following methods:

Of course, some of these methods can be left unimplemented (for example, if a widget does not have a volume, GetVolumes() doesn't do anything).

The code base has been simplified in several ways (see previous discussions).

A reference implementation has been created. The following sections describe the implementation, and offer a link to a tarball containing the source code.

Various widgets have been created to test out the design. Here they are first listed in alphabetical order with a brief description of what they do. Note that the widgets are grouped with their representation(s) (or geometry). Thus the number of widgets is greater than it appears in the list below: different representations result in different user experiences.

A tarball is available which is just a snapshot of the VTK/Widgets directory with the new code added in (as well as modified CMakeLists.txt files, etc.). You should be able to drop this code in to replace your current widgets directory (making sure to save your own stuff if you've been coding in the directory).

Note that each of these widgets/representations have a test associated with them (Widgets/Testing/Cxx).

There are several issues with this design that need addressing.

This work has been supported through the efforts of several organizations and individuals.